I have to admit waking up on the floor at work with the rhesus trolley and oxygen cylinder nearby was not the way I imagined my pregnancy to begin.  At that point I didn’t know I was pregnant, it was just another seizure.  I had gone a whole year without having a seizure so it was a real blow.

When I have a tonic-clonic seizure I have no idea it’s going to happen, one minute I am awake getting on with my day, the next thing I know I am on the floor feeling pretty confused, the strange thing is I have no idea I’ve had a seizure until someone explains it to me, even though I am on the floor surrounded by people looking after me.  It is strange explaining to people something that happens to me which I only know about because other people have seen it happen.  The last few seizures I have had I go blank, staring into space for a while and completely unresponsive to anything, but at this point I am unconscious.  I then go stiff, the tonic phase, and fall to the ground.  The clonic phase happens next, this is what people know as convulsions, where you shake.  I go very blue as my breathing pattern is affected, and bite my tongue.  Slowly I then regain consciousness, I have a headache, my body feels like I’ve run a marathon and I have bitten through my tongue which is one of the worst parts of a seizure.  It takes me days to fully recover.

Luckily the week after the seizure we were going on holiday to Wales.  We had been planning it for months.  We were going away as a whole family, my Mum and Dad, Rich and me, my Grandad and our Dog, Lily, my Sister, Nikki, and her boyfriend, Dan, who also happens to be my Rich’s brother!  We stayed in a cottage near to where my Grandad used to go on holiday as a child.  It was an absolutely amazing week, just what I needed and looking back it was my baby’s first holiday.  I had a couple of episodes of feeling faint but we just put it down to having put up my epilepsy medication after the seizure, I was taking Lamotrigine and the dose had got quite high so it didn’t seem unlikely I was starting to experience side effects.  But looking back it was probably because I was pregnant. 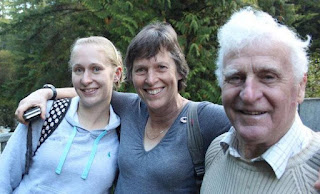 Posted by Clarabella Simpkins! at 19:00