The first 12 weeks seemed to drag on and on, I was being sick daily, had lost half a stone and could only face eating twiglets and bread.  The day we went shopping and they had sold out of twiglets seemed like the end of the world for me!  And although it was horrible being sick all the time I was also quite relieved, I don’t know the scientific reasons why people are sick in the first few months but everyone had always told me it’s a sign of a healthy baby.  After the seizure so early on I was so worried about the baby having something wrong with it, the fact I was being sick like so many other pregnant woman was what I was grasping onto as it seemed normal and so I hoped the baby was normal.

From an epilepsy point of view being sick every day is not a good thing when taking regular very important medication.  I changed my medication times from 10am and 10pm to 8am and 8pm to avoid the times when I was feeling most sick.  The epilepsy nurse had said not to retake my medication unless I could actually see it in my vomit, luckily I wasn’t sick close to taking any of my meds so it wasn’t a problem.

The day of the scan came, I was so scared, I was shaking and my heart was beating so fast, I wanted so much for the baby to be ok but I felt like so much was against us, not only had the baby had to battle against my medication it had also had to go through a tonic-clonic seizure with m e.  I know it had only been 12 weeks but I was already attached to the baby.  We met Emma in the waiting room, it was only the second scan she had been to, the first being her Mum’s when she had Emma’s brother.  Apparently most women don’t want students at their scans, I don’t know how I’d feel about a student I didn’t know but I didn’t even have to think whether or not to let Emma come, she was there to help me and I wanted her to be able part of the whole journey.

When I first saw our baby I was mesmerised, it was amazing, words just can’t describe how I felt.  I had found it difficult to believe I was pregnant in those first few weeks.  If it wasn’t for the pregnancy test telling me I was pregnant I could quite easily just have felt groggy and tired.  But seeing baby on the screen made it all so much more real.  That little person was inside me, and it really was a little person.  We could even see its beating heart and little arms and legs and it was really wriggling.  The ultrasound technician took some measurements and said everything was perfectly average, those were the best words I could hear, all I wanted was a normal, average baby.  She said although it was still early days and the 20week scan would show more as far as she could see the baby was completely normal, no obvious abnormalities.  I knew cleft lip and palette are the most likely deformity with Lamotrigine so I asked whether they could tell if the baby could have that, she said it’s still very early days so she can’t see for sure but she could see that the baby’s stomach was full which shows the baby is swallowing well which is a good sign as babies with cleft palette usually struggle with their swallow.  I was so relieved; I felt like I could now be positive and start planning for actually having a baby.

They also gave a more accurate due date, so baby was due on 5th June 2012 which seemed like an age away, little did I know that from that point onwards time would just fly by!

I also felt able to start telling people about the baby.  There were a few key people we want to tell before we generally spread the word.  So over the next weekend we rang the most important people.  It’s amazing how different people react, some people seem quite uninterested, but I think that’s more because they are in a completely different place in their lives.  But there were other people who I told who really surprised me with all the questions they asked and how pleased they were for us.  Once we had spoken to everyone we wanted to tell ourselves we did what everyone seems to do in the day and age and posted a scan photo on facebook and that seemed to spread the word to pretty much everyone we knew! 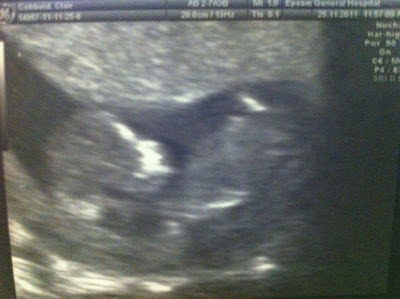