I had my anomaly scan this week, I felt so nervous; this was the scan where they would have a better idea of whether my AEDs and/or seizure had caused any damage to our baby.  Emma met us at the hospital so she could be there too.  I was so relieved when the technician told us everything seemed to be normal and was absolutely amazed at how much detail they could see.  They managed to show the movement of the blood through baby’s heart and kidneys and we could see all of its little fingers.  Baby had its hands up in front of its mouth so it took them a while to check for cleft lip but eventually it moved its hands long enough to check and she said it all appeared normal.  The technician also said that the placenta was at the front and so that was the reason I hadn’t felt baby kick yet so not to worry.  She then asked if we wanted to know the sex of the baby.  We had already discussed this and had decided we wanted it to be a surprise.  There were sort of 2 reasons for this, firstly and most importantly we thought it would be a wonderful surprise to find out after going through the pain and exhaustion of labour.  Secondly is a little more depressing, well I like to look at it as practical.  I still felt like there was a lot that could go wrong and by finding out the sex and naming the baby I think you become even more attached to the baby and also find that the things you buy then become the baby’s possessions even before the baby is here, I didn’t want to feel if things did go wrong I had to get rid of everything.

Having found out that our baby was perfectly average we started thinking about buying the baby some things and that weekend we went out and looked at Prams and baby clothes, suddenly things were becoming very real and very exciting.  We eventually managed to choose a Pram and organised to have it delivered.  We had already thought of names for the baby, we decided if it’s a girl it would be Riley Elizabeth and if it’s a boy, Jamie Benjamin. 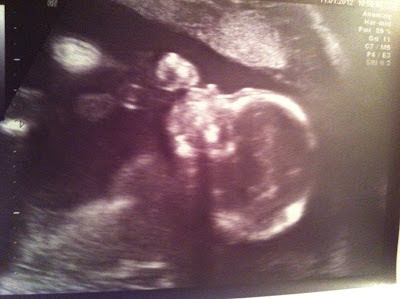