Sleep... ~ a massive issue at the moment

Sleep seems to be one of the biggest issues when it comes to babies and one of the hot topics at the baby groups I go to...

Everyone expects to have sleepless nights and you idea of a good nights sleep definately changes when you have a baby.

There is no right and wrong and no easy way to get into a routine and especially when lack of sleep can trigger seizures it obviously an important issue.  But there is no quick fix it's just important to have some help, Rich and me work as a team, I feed her and if she doesn't settle after Rich will try to get her off to sleep.

A bottle before bed can often help them sleep better but I have persisted with breast feeding (which does mean she won't sleep through the night, needing 1-2 feeds) and touch wood haven't had any seizures so I will continue.  I think things are getting better but it is difficult to see the improvements... one of the things she is really bad with is she just won't settle herself, we have tried dummies, mobiles, music - the only way she falls asleep is rocking in our arms and then being placed down quietly but often she just wakes up... I am hoping it gets better.

Bedtimes are another issue... to begin with she went to bed with us at 10-11ish but as she's got bigger it's moved earlier and now we start our bedtime routine at 7ish, wash/bath, feed and story, bed!  Only problem with that is Rich doesn't get in from work sometimes before she's asleep.  Then if he gets up for her in the night she becomes wide awake smiling and babbling away to him!

The other issue we need to address is moving her into her big cot... at the moment she is in a carry cot but she's getting pretty big in it.  We keep saying when she sleeps well in that we'll move her into the big cot, but I think we might just need to bite the bullet and go for it!  Also I'm thinking a lunchtime nap might help so maybe if she's in her big cot at night I could try to settle her in her travel cot downstairs in the day so I don't have to keep putting her in her car seat to go up and down the stairs...

It's a plan, we will see what happens... watch this spacce! 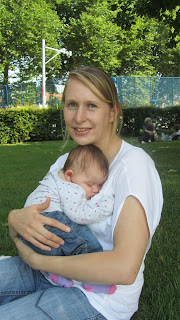 Posted by Clarabella Simpkins! at 15:37

Email ThisBlogThis!Share to TwitterShare to FacebookShare to Pinterest
Labels: Sleep