The pressure of being seizure free...

I have been totally seizure free for 6 months now which is the longest I have ever been seizure free for since I was diagnosed 10 years ago.  Now don't get me wrong I am really happy but part of me is terrified too...

The seed for this blog was planted by a friend of mine who has really inspired me to talk out about something which I find difficult to put into words and which I sometimes feel guilty for but here goes – I just hope this makes sense and that I don’t upset anyone.

For many years I have felt in a difficult place, my seizures don’t happen, daily, weekly or even monthly but my seizures have never fully gone away, in fact at one stage I went over two years without a major seizure and then had one for no apparent reason.  I often find myself feeling bad that sometimes I get down about my epilepsy because so many people have it so much worse.

But talking to my friend made me realise something…  now don’t get me wrong I would never want to live with more regular seizures but in having seizures so irregularly sometimes I feel I can’t be completely honest about how I am feeling around people whose seizures are so much worse.

I often feel bad posting on epilepsy forums about my problems because they often involve issues people whose epilepsy is so severe can only dream of facing.  When your seizures are under control you have to get on with your life – live it to the full or you are wasting that time but the epilepsy is never gone, it is always there in the background, always posing a risk.

This weekend I mentioned this to my husband and he totally understood what I was saying.  He said it’s like if you have seizures all the time someone is constantly hitting you with a bat which hurts and stops you being able to get on with things.  But when your epilepsy is controlled it’s like you are being followed around by someone holding a bat who might hit you at any moment for no good reason – you can’t forget it’s there and you always have that worry with you.

He also told me about an experiment carried out in the 1960s where monkeys received electric foot shocks that were signalled by a preceding tone.  Monkeys were in pairs, with one in each pair able to press a lever to avoid the shocks.   The other monkey in the pair could not press the lever and so received all the foot shocks that were delivered.

The monkeys who had control over the lever quickly began to show signs of stress such as gastric ulcers and some even died.  The monkeys who received shocks but could not try to avoid them, remained healthy although I’m thinking probably weren't particularly happy!

They concluded that the shocks themselves were not severely stressful as the monkeys who had no control over the shocks showed little sign of stress; the critical factor was the stress associated with trying to avoid the shocks.  Having control was the stressful element.

In a way if we get our epilepsy under control with drugs and by making sure we look after ourselves it’s a bit like being the monkey pressing the lever to stop the shocks – we can avoid the horrible seizures but we have to make sure we take our medication every day, get enough sleep, eat healthily, don’t drink alcohol.

The more we do to try and stop the seizures the more pressure we put on ourselves not to mess up.  Then because we don’t have seizures any more we take on more responsibility, we drive, have children, take a job which relies on us being seizure free… and then it’s even more important we don’t slip up – miss our medication, have a bad night’s sleep, get stressed over things, because the consequences of having even just a single seizure are so much greater now…

It’s something I have always felt bad talking about because I feel I should just feel lucky to have such control over my seizures that I can do so much with my life, but suddenly I realised I'm not alone in feeling like this and by not speaking out about it I am bottling up stress and anxiety which isn't healthy.

Maybe just maybe there are other people out there who feel the same and by writing this blog I might reach out to you and make you know it’s OK to feel anxious and down sometimes even when your seizures are well controlled – because we still have to live with the unpredictability of epilepsy just in a different way.
Posted by Clarabella Simpkins! at 21:00 1 comment:

Half way there ~ the ups and downs of epilepsy and pregnancy!

So we had our 20 week scan yesterday and baby is doing really well.  It was actually done by a consultant who while extremely quick seemed very competent so whilst we didn’t get much of a chance to really see baby, I feel like the baby has been checked by the best person possible. 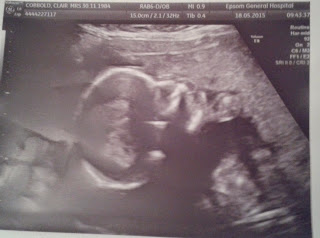 The other good thing about this is that it now means we don’t need to see any medical professionals for a while which I am really happy about.  I can now get on with enjoying my pregnancy which is going really well at the moment and the epilepsy midwife I have been in contact with is making me feel really positive about the whole thing.

I have also been convulsive seizure free for 16 months and completely seizure free for 6 months – this is something I really didn’t think possible and while I am very aware that my epilepsy is a type which is difficult to fully control and so may rear its ugly head any minute I just want to enjoy it while it lasts.

But unfortunately we are really struggling to keep my pregnancy non-medicalised and I’m finding it very frustrating.  We had a hospital appointment a couple of weeks ago with the consultant team at the hospital I am giving birth at.  I was meant to see the consultant but because they were running so late I ended up seeing a registrar who knew absolutely nothing about epilepsy.

We clashed over a number of issues...

Firstly – scans – they wanted to do an extra scan at 34weeks, the epilepsy midwife has told me a detailed scan at 20 weeks by a consultant is enough and I want to stick with that.  They weren’t happy and told me I wasn’t thinking about the baby and then brought up the fact I had refused the Downs Syndrome Test and told me the babies neck was normal thickness which was a good sign –but we didn’t want to know and now you have told us – what if it hadn’t have been normal would they have told us then???

Secondly – an IV – they want me to have an IV in and I don’t want one, their answer to that was – keep seeing the councillor – like she’ll be able to convince me to do what they want!  I don’t want to have it put in so they can put lots of other things through it to cover every possible eventuality.  If there is a medical need during labour then they can put one in then.

Thirdly – discharge – so apparently I’m not going to meet their early discharge criteria even if I have a normal pregnancy and straight forward labour so they will want me to stay in – when I asked why they replied because you are at a high risk of having a seizure after – my argument was that I don’t need to be in hospital if I have a seizure as they have always self-resolved and I will have much more support at home from Rich, family and friends and will be much less stressed at home.  I can self-discharge so although I don’t want to do that I guess it may be the only way to ensure I am in the best place for me and baby.

Fourthly – seeing the consultant team again – I didn’t want to see them again unless anything changes, they want to see me regularly, in the end we decided I would go back at 34 weeks after I had seen my specialist in London.  They told me 4 times ‘you MUST tell us if anything changes with your epilepsy’ making me feel like I was being irresponsible but all I am doing is following the advice from the only epilepsy midwife in the country and I am planning to travel down to Winchester to see her again before this appointment as well just so I feel confident in my decisions.

But on a positive note I could feel the stress that in the past I know has triggered my focal seizures and I didn't have one - so maybe the Keppra really is helping.

To be honest if I do have a seizure they won’t be the first people I call because they won’t be much help, apparently they can’t even take my Keppra levels so I’ll have to go to London for them anyway, I’ll be calling my team in London first and the epilepsy midwife second then I’ll let the obstetric consultants know.
I hate that they are making me feel like I am being irresponsible by not wanting intervention, especially when I am doing what my epilepsy midwife and specialist have suggested.  I am happy to be monitored like any other woman and if they have any concerns at any point I am happy to increase the amount of monitoring and intervention.  But at the moment my epilepsy is the best controlled it has ever been and my pregnancy is going well – why can’t I just enjoy that and feel blessed to be in this position rather than thinking about all the horrible things that could go wrong?
Posted by Clarabella Simpkins! at 21:32 No comments: