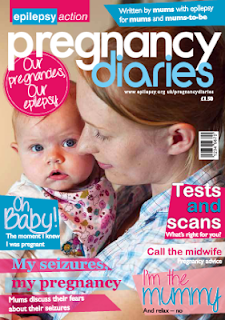 
Epilepsy Action has launched a new campaign, HealthE mum-to-be, to improve the care, support and advice given to pregnant women with epilepsy.

Epilepsy Action has also developed a new magazine for mums-to-be to make sure they are aware of the issues that may affect their pregnancy. The Pregnancy Diaries features the stories of six mums with epilepsy. It charts the progress of their pregnancies and how they dealt with their epilepsy. The new magazine will also be sent to medical professionals across the UK, along with the resource pack, to highlight the issues women with epilepsy face during their pregnancies.

The new and updated resources coincide with the release of the results of an Epilepsy Action survey of almost 500 women with epilepsy. The survey reveals that over a quarter (26 per cent 53/204) of respondents who have been pregnant in the last five years or are planning on becoming pregnant, said a health professional had not discussed epilepsy and pregnancy with them. This is despite national guidelines, which state that pre-conception counselling should be given to women with epilepsy. This means that many women are never made aware of the risks associated with epilepsy and being pregnant.

One of the Pregnancy Diaries writers is Clair Cobbold, 28, from Surrey. Clair was diagnosed with epilepsy when she was 19 and had her first child, Riley, in June. Clair said: “When I found out I was pregnant, I was worried about how my seizures and anti-epileptic medication might affect my baby. But regular scans revealed my baby was fine and throughout my pregnancy, my epilepsy specialist worked with the maternity team to monitor me closely and put a detailed plan in place for labour. I found thinking about having a baby, pregnancy, labour and looking after a baby when you have epilepsy all very daunting. The most important things for me were health professionals understanding these concerns and hearing other mum's experiences, knowing you are not alone. That’s why I’m supporting Epilepsy Action’s campaign.”

Nicole Crosby-McKenna, women’s officer at Epilepsy Action, said: “The majority of women with epilepsy enjoy healthy pregnancies and give birth to healthy babies. But it is vital that women with epilepsy are given information about all aspects of pregnancy and epilepsy. This information should be given as early as possible, and ideally before they become pregnant. Women should be encouraged to work together with health professionals so that their care before, during and after pregnancy can be properly managed. This will help reduce the risk of increased seizures, maternal death and malformations in babies born to women with epilepsy.”

To order a free campaign pack, including an updated copy of Epilepsy in pregnancy: resource pack for obstetrics professionals, and information about all aspects of epilepsy and pregnancy, visit www.epilepsy.org.uk/womenscampaigns

A few links to where the campaign has been in the press:

www.epsomguardian.co.uk/news/10158756.Mum_with_epilepsy_publishes_diary_in_magazine
(there a couple of issues with this one, but its still a valuable piece for us – for example, we obviously don’t say ‘epileptic’ ourselves, but explaining this to journalists is a bit of a losing battle.)
www.964eagle.co.uk/news/local-news/867660/a-surrey-mum-speaks-out-about-how-her-epilepsy-affected-her-pregnancy
www.babyworld.co.uk/2013/01/pregnant-woment-with-epilepsy-need-support