I had a couple of my focal seizures this week, they were very small but still happened, although I knew I would probably have some more as they weren’t controlled before the pregnancy.  Luckily I received a letter from my specialist in the post the next day saying my Lamotrigine levels were still quite low so I increased my dose to 550mg which made me feel a little more confident.

My friend Leti came to visit from Switzerland with her husband, and little boy who was almost 2.  It was so lovely to see her; we managed to have a proper chat about everything, about my pregnancy and how she was getting on in Switzerland.  I had always had great admiration for her as she had become pregnant not long after moving to Switzerland and so had quite a limited support network.  They had brought him up very much on their own, I’m not sure I could do that, I know I am going to rely so much on my Mum and close friends to help me with the baby.

But having them stay with us taught us a lot about looking after a young child, and I think Rich became more confident because he was so good with their little boy.  We went to the local children’s farm and Rich played with him in the soft play and Rich fed the fish with him every night.  He just seemed like a natural Dad, I knew he would be, but seeing him with her little boy made me smile so much.  It was especially amazing and special because her little boy could only speak Spanish so a lot of our communication was with pointing and facial expressions!!! 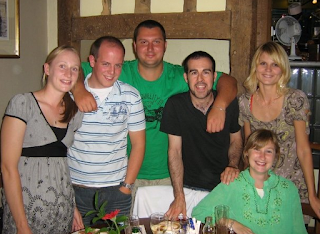 Posted by Clarabella Simpkins! at 18:00 No comments:

I had started to see stars occasionally, which I was a little concerned that it could be pre-eclampsia but I didn’t have any other symptoms so I wasn’t too worried.  I happened to get them just before I saw the midwife and my blood pressure was fine, but she suggested I went to the anti-natal assessment unit if it happened again, it just happened that that was the last time they happened which was lucky as I didn’t really fancy walking out of work to go to the assessment unit.  I spoke to my epilepsy nurse about seeing stars and she wasn’t too concerned.  She said it could be because I am on such a high dose of Lamotrigine but not to worry too much and enjoy my pregnancy.  I also had my anti-D injection as I am blood group A rhesus negative just to throw another spanner in the works.  A friend of mine was really worried when she found out she was rhesus negative but to me it is the least of my problems and from what I have read about it, the risks are very small.

Posted by Clarabella Simpkins! at 17:00 No comments:

Email ThisBlogThis!Share to TwitterShare to FacebookShare to Pinterest
Labels: Pregnancy, Week by Week

People whose blood is rhesus positive have a substance known as D antigen on the surface of their red blood cells. Rhesus negative people do not. About 15% of women are rhesus negative. This isn't usually a concern for a first pregnancy, but it may mean some extra care is needed to avoid problems if you get pregnant again.
A rhesus negative woman can be pregnant with a rhesus positive baby if the baby's father is rhesus positive. If any of the baby’s blood enters the woman’s bloodstream, the woman’s immune system can develop antibodies (infection-fighting proteins) against the rhesus antigens. This is known as sensitisation. A transfer of blood can occur during birth, or if the woman has a bleed or an injury.

Production of the antibodies is not a problem in a first pregnancy, but when the woman is pregnant next time with a rhesus positive baby, her antibodies can attack that baby’s red blood cells. This can result in a serious condition called haemolytic disease of the newborn, which leads to anaemia and jaundice in the baby.

If the woman is given an injection of a solution called ‘Anti-D’, it will ‘mop up’ any rhesus positive antigens, preventing production of antibodies against the baby. Anti-D injections reduce the risk of a rhesus negative woman becoming sensitised.
NICE recommends routine antenatal administration of Anti-D to all rhesus negative women in case sensitisation occurs. This can be given as a one-off dose at 28-30 weeks or as two doses at 28 and 34 weeks. It is quite safe for both the mother and the baby.
Posted by Clarabella Simpkins! at 21:52 No comments:

Email ThisBlogThis!Share to TwitterShare to FacebookShare to Pinterest
Labels: Pregnancy

My pregnancy had pretty much gone smoothly since I’d stopped being sick and excluding the seizure right at the beginning.  I was feeling pretty good, I didn’t feel huge and I loved feeling baby move, it was comforting and just an incredible feeling knowing there was a little life forming inside me.  I was feeling less tired than before I was pregnant which was possibly due to my Lamotrigine levels being lower, it made me remember what life was like before I started the medication and went to highlight the effect that they had on my tiredness and I think it’s more than that, I think they dub down life somehow, it’s difficult to explain, but I was feeling full of energy and just so much more awake and alert.  I loved it, I was finding I could stay out till 11 or 12 at night without feeling too tired and found I was able to function on less hours sleep; I was starting to feel more confident in my own body and the amazing little life we had created. 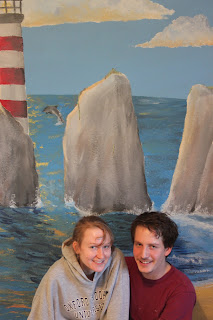 We also started setting up the nursery, the most amazing part was that Nikki and Dan painted an amazing mural on one wall of the needles.  It really was incredible, so many people have said how talented they are and what a beautiful nursery we have.  My Dad also went up in the loft to see if they still had my old cot, which they did.  It took Rich a couple of hours to set up as hardly surprisingly they hadn’t kept the instructions and there was a crack in the head board but quite low down so it didn’t really effect it.  It looked amazing, it didn’t look like it had been in the loft for 20 years and it was my cot… after having a couple of different mattresses delivered and returned we found one which fitted pretty perfectly.  I spent a weekend painting an old bookcase we had been given and a cheap chest of draws we had bought white.  I remember standing in the doorway to the nursery, and thinking it looks perfect, it made me so excited about baby’s arrival, I felt prepared and more confident.
Posted by Clarabella Simpkins! at 17:00 No comments:

Email ThisBlogThis!Share to TwitterShare to FacebookShare to Pinterest
Labels: Our Life, Pregnancy, Week by Week

I had to go up to London just to have bloods taken to measure my Lamotrigine levels, and although it’s a bit of a faff, going all that way, I would rather go myself and know they’ve got to the right place rather than having them done at my GPs and finding out 2 weeks later they never even arrived at the lab let alone got read!  This has happened to me twice before!  The best part of going to London though was that my Mum came with me; we went for lunch and did some shopping up in London.  It’s always nice to spend some quality time with my Mum doing something a bit different as I love seeing her so regularly but getting to spend a whole day with her is lovely, proper catch up and discussion time.

I also saw the consultant at Epsom Hospital, this time it was a different consultant and I have to say she was less than convincing in her confidence about my care.  I explained my medical history again… you have no idea how many different health professionals I have seen and how I have to tell my full medical history in a 5minute period, I am getting quite good at knowing what they need to hear and what they don’t.  The consultant must have said at least 3 times that I must get my specialist to write a clear plan when I next see her… added to this the fact that she seemed desperate for me to see my specialist sooner than 16th May and her saying “we don’t see many people like you, who’s epilepsy isn’t completely controlled”, you can probably see why I didn’t leave feeling overly confident about the situation.
Posted by Clarabella Simpkins! at 18:00 No comments: