The day after I had a baby shower, it was a bit late to cancel it, and there was no reason to really, I know Grandad wouldn’t want me to mope about and it was a good way to take my mind off of things.  So many people came and brought us so many wonderful gifts, it was a lovely evening, I feel so lucky to have so many people who care about me.

I had my second anti-natal class which was taken by a physio, it was talking about anti-natal and post-natal exercises as well as giving advice for any aches and pains people were experiencing.  I was still doing pretty well but was good to get some advice in case things did start to ache.

This week was my final appointment at Epsom Hospital.  It was just to put in place the final plan based on what my London specialist had suggested.  I almost had the doctor who saw me last time and who was really understanding but they changed her to another patient, so I ended up with the doctor I wasn’t so keen on after some of her rather patronising comments in the past, this time she said something along the lines of, you must really hate having epilepsy… no I love it, what a silly comment!  She also wanted me to wait til I was in hospital to get hold of the Clobazam, I pointed out that it could be 2am on the bank holiday weekend, would they really be able to get hold of it straight away as it wouldn’t be much good after being in labour for hours.  Eventually she reluctantly agreed but said “make sure you don’t take it before you’re in labour” made me feel pretty angry, she couldn’t even trust me with Clobazam.

It may sound arrogant, but I think I am an expert patient, I have had to learn as much as I can about epilepsy as in the past I have had to prove what a doctor is saying is wrong, both in my own care and also the care of young people with epilepsy who I used to work with in my last job.  I still remember having to take a child to hospital because we couldn’t give him anymore emergency medication and having to stop a doctor almost overdose him on more of the same medication.  It is times like that when you do doubt yourself but you have to have the confidence to stand your ground.  After that I learnt knowledge is power, I listen to what doctors say, take their advice, work with them, I am not afraid to ask questions and research anything I am concerned about.  I also don’t just go looking around Google as I have been accused of doing by doctors in the past and I definitely agree the internet does have a lot of incorrect information on it, you have to be careful where you look. I only look on charity websites, drug company websites or research which I have learnt to use correctly as part of my degree.  Being empowered in your care, it’s what the NHS is promoting so don’t be afraid of it, some doctors don’t like it but it is your right to have control over your care, to listen to doctors, question them, work with them and find out where you can read more and take control of your condition, it builds your confidence.

But getting back to my appointment, I can’t just criticise the doctor as she made a clear plan based on what my specialist’s, anaesthetist’s and midwife’s advice.  She also agreed with me that if I was happier staying at home in early labour it was the best place for me, but not to let the pain get too much as it could trigger a seizure which I completely agreed with.  I thought the issue of how long I stayed after was best to face after the event, there were so many things that could impact on it even without my epilepsy, thought it was best to wait and see, and I was definitely right.

I also had to make an appointment to have a sweep done at 41weeks to help the baby along!  Somehow it seemed very strange to book an appointment in case things didn’t happen, but I can see the point as usually first babies are late.
The biggest thing on my mind this week and next was my Grandad’s funeral, I think the time between someone dying and the funeral is a strange period, you don’t really grieve, planning it takes your mind off the actual grieving process.  We are a small close family and so we worked closely together to make it really personal, there was so much to do.  We had a brilliant registrar and together put together a lovely service, so many people had so much to say about him, he was truly loved by so many people.  Nikki and me put together the order of service and made little packets of seeds to give to everyone to remember him.  My uncle, mum and me found lots of photos to put into a slide show to have on during the service.  There was just so much to do and kept me busy for the 2 weeks leading up to my due date.  All the time I was thinking, baby please don’t come before the funeral, most people at that point just wanted the baby to arrive, I desperately wanted it to be late.  I remembered the midwife saying often if you’re stressed the baby doesn’t come, I was hanging on that fact and it would turn out she was probably right.

We had our final anti-natal class where we talked about looking after a baby, mainly about feeding.  We had to do an exercise where we got into groups and discussed the pros and cons of breast feeding, we happened to be in a group with a couple of people who were completely set on breast feeding, they just couldn’t see any cons.  Rich and me played devil’s advocate, because while I am completely pro breast feeding and was desperate to breast feed I am well aware there are lots of issues which could mean it’s not possible for some people and I think it’s wrong to make people feel like they’ve failed because they have to bottle feed their baby, you never know it might be you. 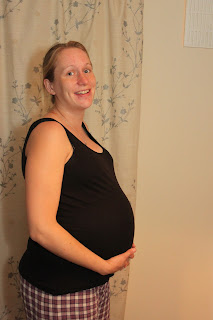 The weather up until this week had been pretty grey and cool. You may wonder why that matters. When the sun comes out and temperature sores it makes being pregnant a whole lot harder!  Up until this last week or so I had been fine, and not feeling too big… but the hot weather suddenly made me feel very pregnant, I was walking up Sutton high street and kept having to stop because I was out of breath.  My feet were also very swollen, my socks and trainers left big indents in my feet and soon I resorted to flip flops but where the strap went I had huge indents!  It was very uncomfortable, I had also noticed my hands were a little swollen, I couldn’t get my rings off which was a little worrying!  If you have general swelling all over then it could be pre-eclampsia so it’s important to go to your doctor but mine was just my feet and hands so was just one of those pregnancy things. I was by that point pretty big!  Most people would be willing the baby to come at this point, but still I was willing it to hang on until after the funeral.
Posted by Clarabella Simpkins! at 11:01