I was being interviewed for some research yesterday and during the discussion we got onto the customised breaks I have on my buggy.  I don't think I have mentioned much about them and for me they were one of the things that gave me the biggest piece of mind.  A charity called Remap did them for me, they are an amazing charity.

They work through a nationwide network of dedicated volunteers who use their ingenuity and skills to help people with disabilities to achieve much-desired independence in some aspect of their lives, or to enjoy leisure opportunities previously closed to them.

With my bugggy, I chose whichever buggy I wanted, in my case a Quinny (chosing a buggy in general as a parent is pretty tricky!) and a volunteer from the charity came and had a look at it and then took it away to think up a way the breaks could be put on.  Then he came back a few weeks later with a prototype which didn't effect the buggy at all to see if I thought it was ok, would work and was happy for the changes they would need to do to the buggy.

I then said it was fantastic and he took it away again for a couple more weeks and it came back with the breaks all sorted.  They are an ingenious use of bungy cords and bike breaks and the only way they had to alter the buggy was to drill 2 small holes in the handles at the sides.  If I took it all off no-one would really know it was ever there.  Although it is a made at home with one off design it looks really proffesional and you wouldn't look at the buggy and think who attached all that tat to it.  It is amazing, everyone thinks so and actually it was really useful because I didn't need to worry about faffing about with breaks if I stopped on a hill. 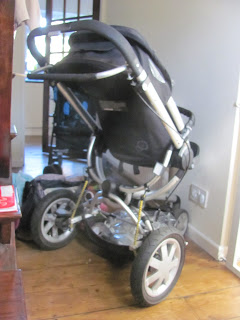 The only thing I do have to do is occasionally change the break cables as they rub on a piece of metal and frey but that is it and I have had to change the Quinny tyre innertubes a few times because they get punctures so nothing is perfect.  It is also worth noting that it does invalidate the guarantee as it is an adaption to the buggy.

I couldn't find a buggy which had any sort of dead break and talking to others they have said they could only find very expensive buggies with dead breaks.  It only cost me the cost of the materials and volunteers petrol which worked out at about £40 and we gave them a donation.  It was amazing, I managed to have the buggy of my choice with the amazing breaks which have made such a huge difference to my confidence getting out and about. I can't thank them enough.


Posted by Clarabella Simpkins! at 08:35