Our Weekend Away in Somerset

Last weekend we had a fantastic weekend away.  We visited Rich's god mother in Somerset and then went down to Bournemouth to visit one of Rich's friends and play in the huge sandpit (the beach!) and the massive swimming pool (the sea!).  It was great to get away as a family and we did lots of things, saw Bison, played in 2 soft play places and explored a castle :)

But... yes there is a but... Riley scared me beyond anything I could imagine.  We were all sitting eating dinner, Riley was on her booster seat attached to a chair.  She must have suddenly kicked the table because she went over backwards on her chair onto the slate floor!  The chair broke and she screamed, but within 5minutes she was happy again pointing out the dogs and crawling round the garden... but I couldn't believe she was ok.  I have to admit I spent the whole weekend worrying that she could have a bleed in her brain or a neck fracture.  It just happened the next day she was teething really badly and was really unsettled.  I kept thinking we should go to A&E but with it being an hour and half round trip and knowing they would probably do scans and stuff I knew in my heart of hearts I was over reacting.

But it was at that point I realised I was a city person, I may not think so because we don't live in central London but at the end of the day our closest A&E is 15minutes away and if it had happened at home we would have been straight there even if she seemed fine.  That makes me feel safe, I couldn't cope being in the middle of nowhere especially with the added fact public transport is so limited.  It is lovely to get away for a few days but I'm always a little relieved to be home.

But the most important thing is Riley is fine, no damage done, just terrified me.  I will leave you with a photo of Riley on Bournemouth beach... just to prove she was ok :) 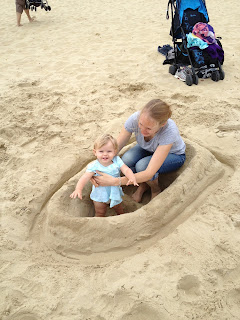 Posted by Clarabella Simpkins! at 22:09

Email ThisBlogThis!Share to TwitterShare to FacebookShare to Pinterest
Labels: Being a Parent, Our Life