TV ~ In the Night Garden 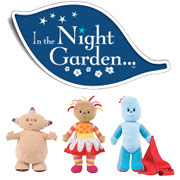 Riley doesn't watch much TV.  I'm not obsessive about it, she can watch some TV, but I try to keep her busy with other things and as we like to get out and about so much it's not hard to avoid much TV.  That's another thing about not being able to drive it does tend to take longer to get places and so leaves less time hanging around the house!

One thing Riley does tend to watch is 'In the Night Garden' as it's on Cbeebies just before bedtime and after dinner.  A few days ago Riley was eating dinner a bit late and Cbeebies was on it the lounge.  If you have never watched in the night garden it begins with some twinkly stars with music and then a parent tracing a circle on a child's hand.

Anyway she was sitting eating her dinner when all of a sudden she put down her spoon and started tracing a circle with her finger on her hand.  I wondered what she was upto when I realised 'In the Night Garden' had started and she'd heard the music and started the actions...  maybe she's watched a bit too much of it!!!

But I'm going to put it out there... what if 'In the Night Garden' is a clever way of indoctrinating our children, maybe there's some hidden message in there and the next generation will be programmed like robots by Iggle Piggle, Makka Pakka and Upsy Daisy... or maybe not!!!

Posted by Clarabella Simpkins! at 21:24

Email ThisBlogThis!Share to TwitterShare to FacebookShare to Pinterest
Labels: Development, Our Life, Things to do